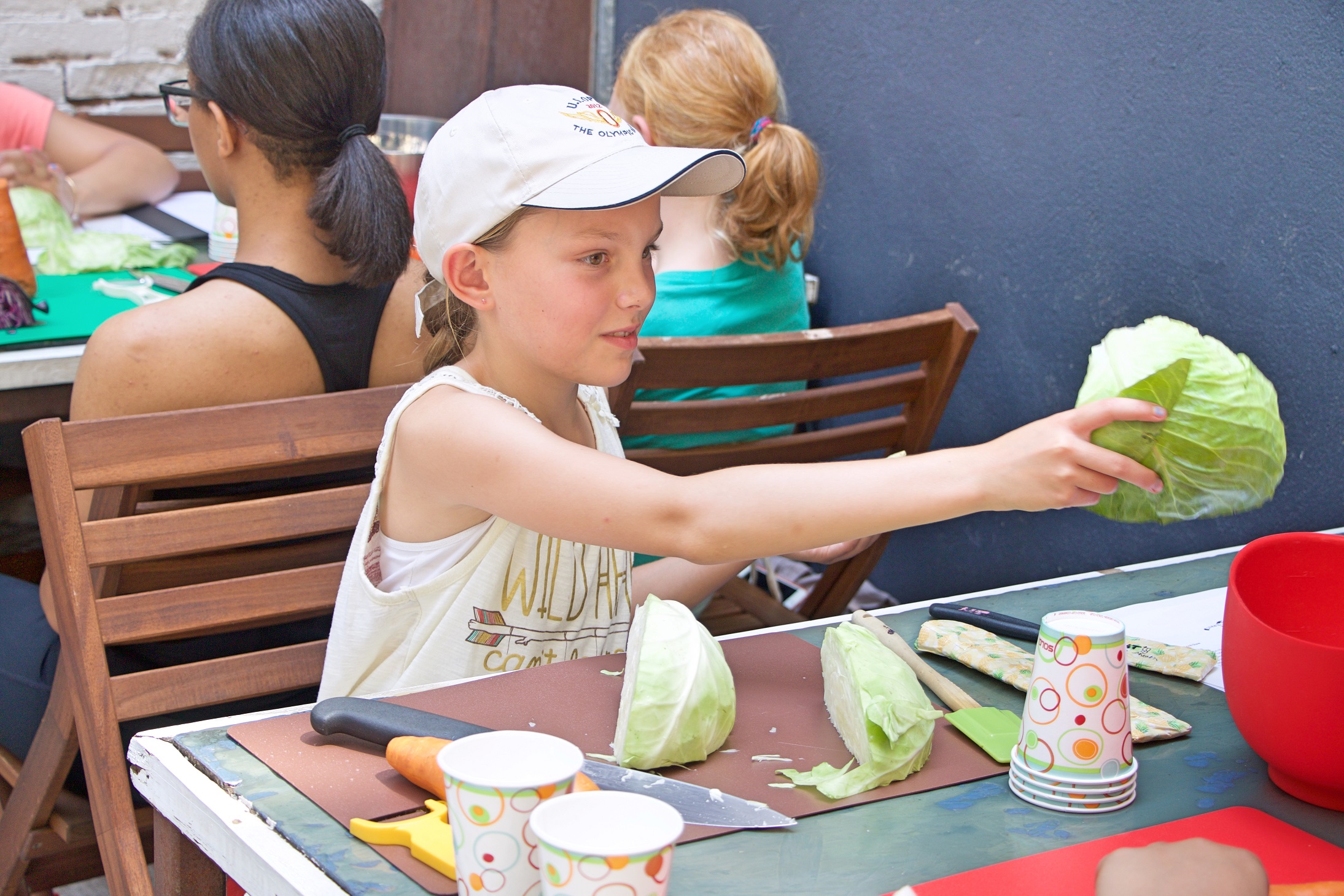 We had the privilege of spending one of our NYC camp days with the President and Co-Founder of Luke’s Lobster, Ben Conniff. Ben gave us the inside scoop on what it means to fish for seafood in a sustainable way in efforts to ensure a balanced ecosystem where healthy lobster populations can be better maintained.

All of the seafood that’s served at Luke’s Lobster comes from Maine and is caught by fishermen who Ben and the Luke’s Lobster crew know and trust. This means that these fishermen follow the guidelines that have been put in place to protect fish and their habitats. By doing so, fishermen take greater care in their work and pay extra attention to preserving varieties of lobster, crab, and shrimp for future generations of eaters to enjoy.

After learning a little bit more about Ben and how he came to be part of the sustainable seafood world, we got right to cooking. Up first was the chopping, peeling, and julienning of cabbage and carrots to go into our Poppy Seed Slaw. Our knife skills were put to the test as we worked together to cut up these heavy duty vegetables. What a workout!

Campers had the chance to brush up on their culinary vocabulary when Ben taught us the definition and process behind making an emulsion for the poppyseed vinaigrette. This is the process of steadily combining oil into a mixture of vinegar and seasonings until the two become a cohesive product — it might just be the most delicious kitchen magic of all.

Soon there was so much seafood and so little time! Campers worked in teams to grill fresh buns, make a butter and lemon spread, and stuff their very own rolls until they were piled high with fresh, colorful pieces of lobster.

We couldn’t leave until we’d learned about the most important ingredient of all: the Luke’s Lobster secret seasonings. For the second time during our week in NYC, the blindfolds came out as campers were put to the test in smelling and tasting the five different spices that make the Luke’s Lobster dishes so irresistible. The secret ratio of ingredients that create this culinary perfection? Our lips are sealed!

Want to join in on the sustainable seafood experience? Check out the official Luke’s Lobster recipes below to get cooking your very own signature lobster rolls, Poppy Seed Slaw, and fresh blueberry compote (which we paired with ice cream!).

In a small saucepan, melt the butter over low heat and brush half the butter onto the outer sides of your buns. Heat a 10- to 12-inch cast-iron pan over medium heat for 2 minutes, then toast the buns in the pan until golden brown, 1 to 2 minutes per side.

Spread about 1 teaspoon of the mayonnaise on the inside of each bun. Arrange a quarter of the lobster meat inside each bun. Reheat the remaining melted butter, if necessary, and stir in the lemon juice. Drizzle the mixture evenly over the lobster in each sandwich. In a small bowl, stir together the oregano, thyme, celery salt, and pepper, then sprinkle a pinch of the seasoning mixture over each sandwich.

Thinly slice the cabbage and peel and slice the carrots. Combine all dressing ingredients into a container and mix well.

Place 1 cup of the berries and all of the sugar and lemon juice in a small saucepan over medium heat. Let simmer until berries begin to break and juices come out, about 5 minutes. Transfer to a mixing bowl and add the second cup of blueberries. Stir until combined.