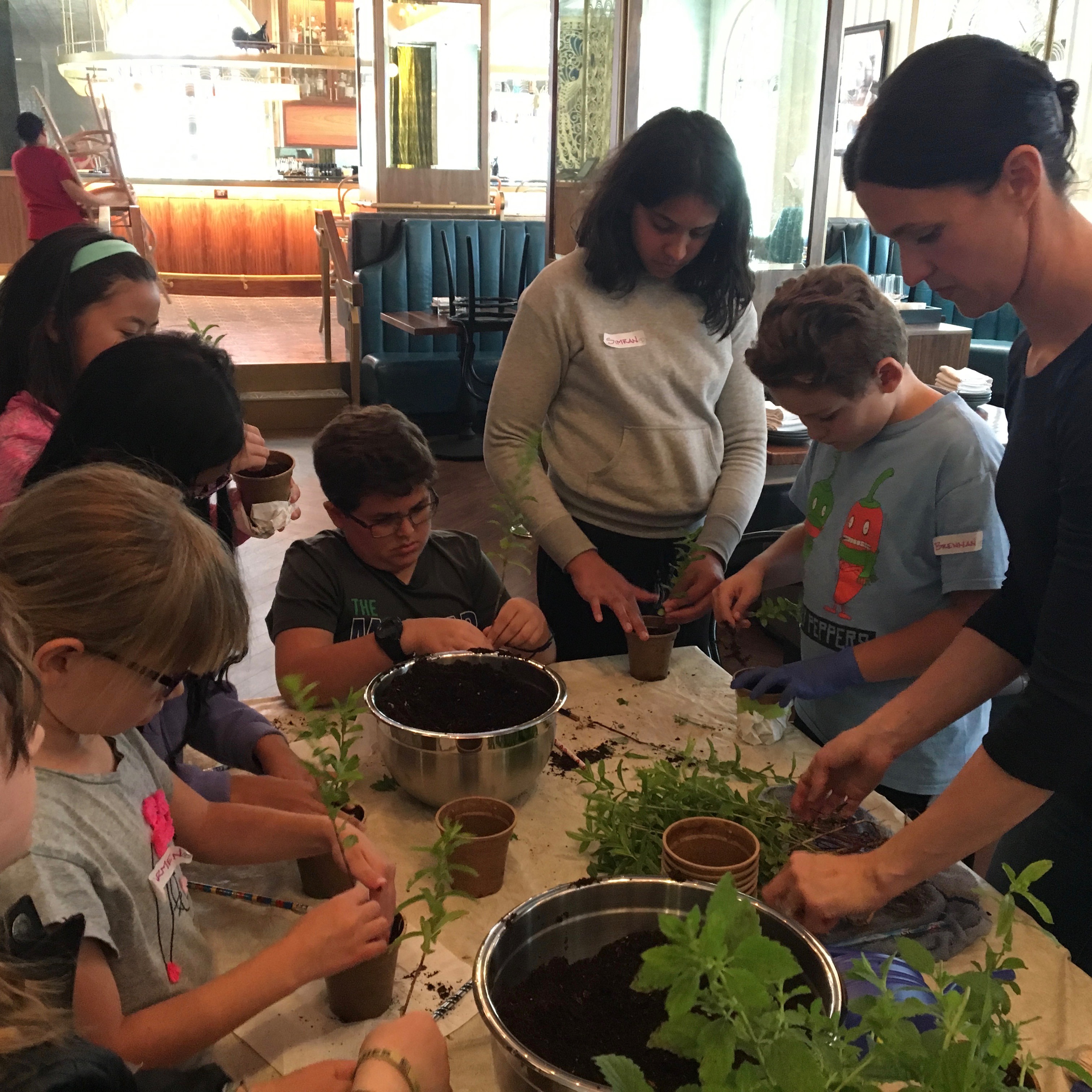 Young Chefs Learn What it Takes to Cook For a Real Lunch Service!

One of our camps last week took place at Gibson Restaurant: a beautiful, upscale new American restaurant located in San Francisco, where fourteen young chefs learned about owning and running their own restaurant. The Gibson staff lead us through the ins and outs of working in a kitchen, serving customers and setting tables, making reservations, and even the development projects like marketing and public relations. The campers were engaged in and excited about every single stage of the process. The week was directed towards the creation and manifestation the camper’s own cafe where they served their family, friends, and a few public guests — including one food critic — a menu they had prepared special for the day.

On Wednesday we were visited by culinary gardener and long-time Sprouts volunteer Samantha Nobles who graciously stopped by the restaurant to have the young chefs learn about growing and gardening herbs. The campers got to smell, touch, and taste herbs straight from her garden like Vietnamese coriander and Mexican pepperleaf. Samantha also brought in a number of different varieties of mint such as strawberry, chocolate, and Egyptian. Many of the campers were so excited by the all the new and different varieties they initiated their own project of making mint infused water. The campers even got to plant their own Persian mint stems to bring home. Samantha left us with bunches of the varieties we learned about to make our own syrups which were later used to in the sodas for our restaurant opening.

Afterwards we went on a field trip to the Civic Center Farmers Market where the campers got to try endless samples of seasonal produce like cherries, nectarines, apricots, and peaches. All of the campers were drawn to the honey stand where they could find honey sticks in every flavor imaginable. We bought cases of fresh strawberries and plums to bring back to Gibson to be used in their dinner service.

Back at the restaurant, we teamed with the Gibson kitchen staff to prepare fried rice for the whole restaurant staff  — front and back of house alike — to eat before dinner service. The campers practiced their knife skills and learned professional kitchen techniques plus other helpful tips for staying safe in the kitchen. When the food was ready, everyone got to share their meal together for what is commonly referred to as a “family meal” in the food service industry.