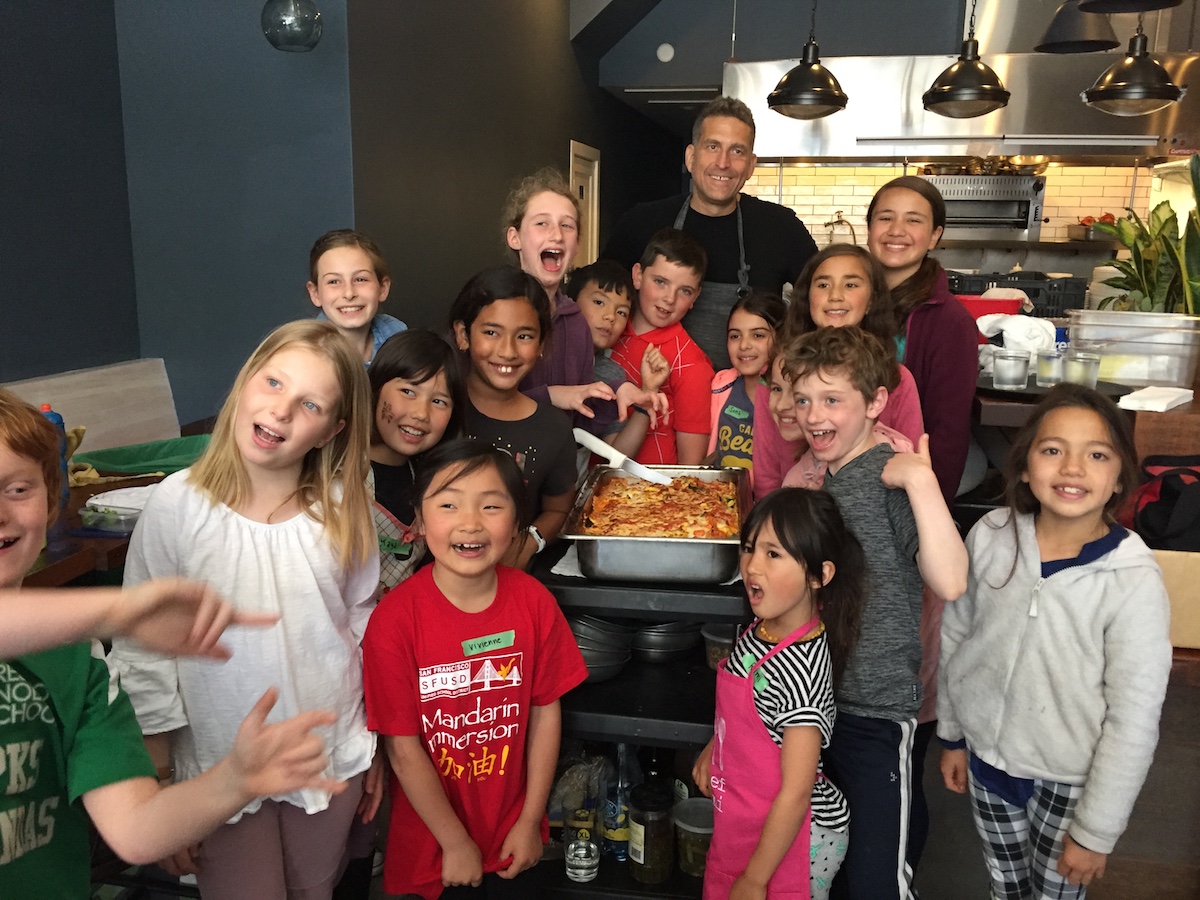 A Tasty Start To Summer!

To say these kids exceeded our expectations on the first day of camp would be an understatement! These young chefs came knowledgeable, prepared, and eager to learn more. Most walked in with previous experience in a kitchen but even those who did not picked up the skills and terminology practiced very quickly.

The day began at 3rd Cousin, located on Cortland Avenue in San Francisco. Greg Lutes, the chef and owner of 3rd Cousin, was quick to engage the kids and immediately grasped their interest. At the start of the morning, they reviewed camp rules and a knife lesson to practice and ensure safety throughout their week of cooking. Plastic knives were used since it was the first day and it was left up to the campers to demonstrate responsibility in the kitchen before being trusted with their chef knives. The campers mastered their chopping skills in no time and quickly moved on from the apples that were given to them. Chef Greg noticed that they were ready for a new lesson, and brought out lobsters that he was using for service later that night. He allowed the kids to pet, hold, and ask questions about the lobsters before teaching them how to make stock – drawing their attention right back in.

These young chefs assisted Chef Greg making a vegetable lasagna with a decadent chocolate pudding for dessert. Each camper was very eager to participate in creating each dish and were great at taking turns to allow everyone to help out. Chef Greg involved them in every step of the cooking process and delegated responsibility amongst the campers very well. Our soon-to-be culinary masters were able to practice skills such as peelings carrots, shredding cheese, chopping vegetables and mashing tomatoes for the lasagna and learned terms such as taring and tempering during the process of making that delicious pudding.

During the transition times between recipes and waiting for the food to cook, the campers were proactive with keeping the restaurant clean. They discussed the importance of staying clean and organized between tasks and asked to help with washing dishes, sweeping the floor, and composting food scraps. Once the lasagna was ready, the little chefs were extremely proud of their culinary creation – most clearing their plates and asking for more within minutes. They were encouraged to try everything that was prepared, even if they had a prenotion of disliking a certain food. If they tasted the food and still did not enjoy the flavor, they were challenged to describe why and how it could be improved. This allowed them to explore their culinary mind and develop discernment skills for future recipes.

Once the morning wrapped up at 3rd Cousin, these culinary kids adventured over to Alemany Farms where they used the beautiful outdoor kitchen space to make tofu kebabs, a seasonal salad with avocado, chickpeas, tomatoes, and seasonal vegetables harvested from the garden. For dessert they created an aquafaba that was served with coconut pineapple crisps. Split into groups, the campers were assigned an individual recipe to conquer and make their own. They ran around harvesting produce from the farm and let their imaginations run wild. In addition to the planned recipes, they created two additional recipes – a quinoa and vegetable salad and a tofu stir fry with peppers and greens.

They explored skills such as sautéing, chopping, making their own dressing, and whipping chickpea liquid to make aquafaba to add to their culinary repertoire.

The day was full of energy because the young chef masterminds were eager to be involved with everything. They all demonstrated their knowledge and desire to be in the kitchen. They were respectable of Chef Greg, his restaurant, and each other. When they were leaving at the end of the day, many of them were already anxious to be back for the next day.