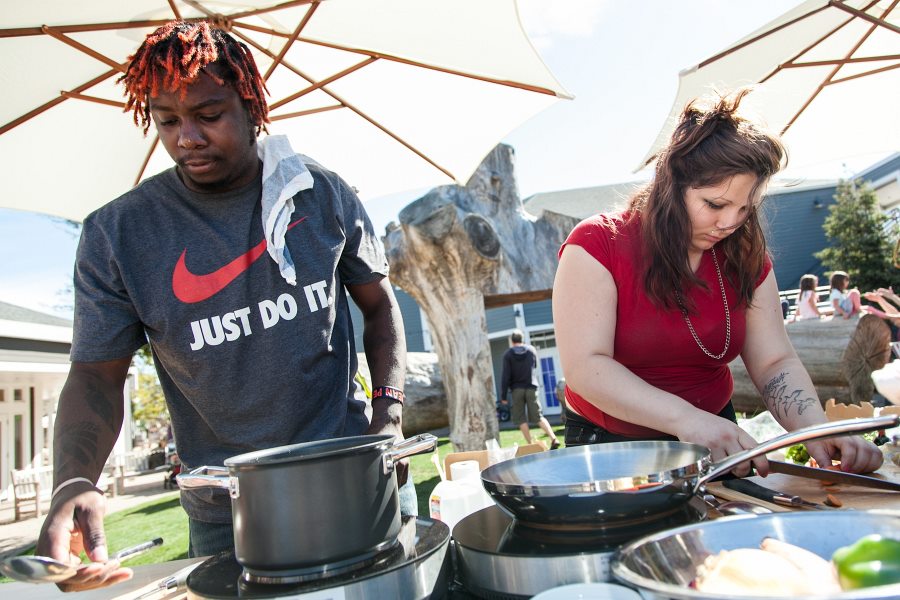 For Chef Kika Eller, cooking is more than a means of feeding people—cooking is its own form of art.

Long before she stepped into her chef’s whites and established herself as a strong and capable female chef in a male-dominated field, Chef Kika knew she had a genuine interest in food. She credits her mother’s Italian cooking as being one of her largest influences, inspiring much of the Italian-themed cuisine she creates today. However, exploring this interest was not always easy, and Kika faced numerous obstacles in her path prior to her involvement with Sprouts. Growing up in the Bay Area, she began cooking for herself and her family at nine years old. Times were often tough at home, and it was up to her to take the food her family had and create something delicious. When Kika joined the Chef Training Program she was excited to learn, but distrustful of those who offered to be her teachers. Kika carried the weight  of absent parents, harsh living conditions, wondering where her next meal was coming from, and low funds on her mind, all while learning to work with new coworkers and skill sets. She fought against her initial instincts to push back. Despite what she had been through, Kika knew she wanted to create her own edible works of art, and challenged herself to explore the opportunities before her. This was her chance to be a part of something she had always loved, and she was committed to giving it her all.

Chef Kika’s relationship with food and cooking took a leap forward when she applied for Sprouts’ Chef Training Program in 2012, and was then placed as Chef Training intern in the well-known Oakland pizzeria, Pizzaiolo. The Pizzaiolo kitchen presented her with new responsibilities and expectations. She was confident in her home cooking experience, but knew she had a lot to learn. All of a sudden, Kika was learning how to make meatballs from scratch, how to use a meat grinder, the best batter method, and mastering complex knife skills, etc., techniques and skill sets she once thought may have existed, but had no prior opportunity to explore. Throughout the course of her internship, Chef Kika had a full role on the culinary team, and worked directly under one of the head chefs. Her mentor at the time, Chef Ben Harrison, describes her “a handful in all the right ways.” After only a few days in his kitchen, Chef Harrison could tell “she was driven and took direction well,” and it became clear “that if she put her mind to something and decided to do it, she could.” Chef Kika recalls her time in the Pizzaiolo kitchen as immeasurably valuable, and names it as the single strongest foundational pillar that her cooking career is continually building upon. In Chef Kika’s own words, “It was a great place for me to get started, and opened a lot of doors for me. It’s a big name in the Bay Area, and every job I have gotten since then has been happy to see [Pizzaiolo] on my resume.”

Chef Kika can sum up her experience with Sprouts in one word: “Rewarding.” In retrospect, her time with Sprouts represents a brief period in her career, but she remembers it as being nothing short of life changing. The path that brought her to Pizzaiolo then took her to other reputable Bay Area kitchens, including Oakland’s seafood eatery, AlaMar, and San Francisco’s popular Grace Street Catering Company. Over the course of her career, Chef Kika’s skill set has grown immensely, yet she still faces new challenges at each turn in the road, like pushing past stale gendered expectations present in every kitchen she works in. Six years after beginning her internship with Sprouts, Chef Kika is in the midst of opening her own catering company, Bella Dulce Catering and Fine Dining. Communicating with people to determine what they want, what they like, and what they find aesthetically pleasing gives her a chance to connect with members of her community in a new way. For Chef Kika, “every plate is like a canvas,” and being able to use her art to feed people leaves her with a proud sense of accomplishment at the end of the day.

If you give an intern a meal, they will feed themselves. If you give an intern cooking lessons, they will feed a community. Sprouts gave Chef Kika the tools and opportunities she needed to turn her already present skills into a career, and it can help you do the same. If you, just as Chef Kika was six years ago, are browsing our website, asking yourself if you should get involved with our Chef Training Program, she has one message for you: “If this is truly the career path you want to take, this is a great opportunity to get hands on training. Do it.”